What is spinal muscular atrophy (SMA)?

SMA is a progressive, rare genetic disease that is caused by the survival motor neuron 1 (SMN1) gene that is missing or not working properly. Learn more about how SMA is inherited, the role of the backup gene, and the signs and symptoms of SMA.

What is spinal muscular atrophy (SMA)?

SMA is a progressive, rare genetic disease that is caused by the survival motor neuron 1 (SMN1) gene that is missing or not working properly. Learn more about how SMA is inherited, the role of the backup gene, and the signs and symptoms of SMA.

*Calculations are based on an estimated US population of 330 million.

Without enough SMN protein, select motor neuron cells throughout the body may lose function and die. As a result, patients with SMA experience muscle weakness and may develop difficulty breathing, swallowing, or speaking.

The role of a backup gene

In fact, the SMN2 gene makes only about 10% of working SMN protein compared to the protein produced by the SMN1 gene. That is why it is essential to replace the function of the missing or nonworking SMN1 gene.

Learn about the types of SMA 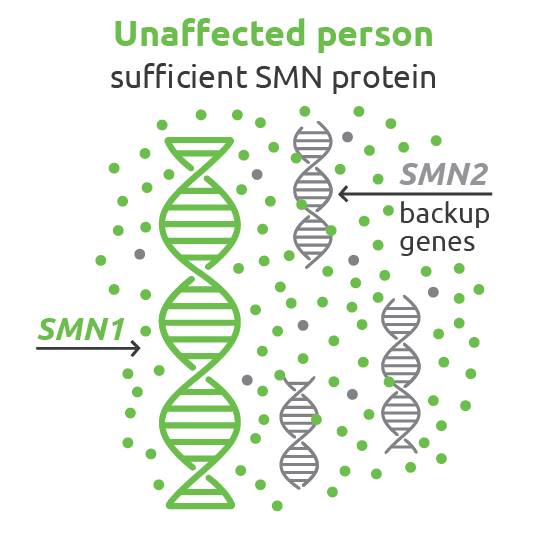 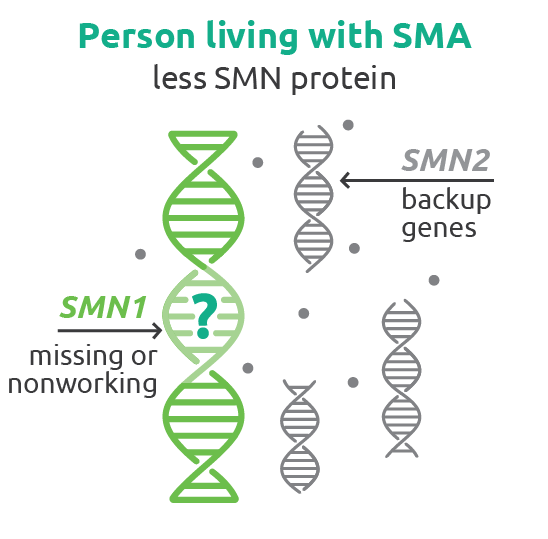 Scientific innovation has led to some pretty incredible breakthroughs in modern medicine. And today, we’re going learn about one of those amazing breakthroughs—a gene therapy called ZOLGENSMA® (onasemnogene abeparvovec-xioi) that stops the progression of spinal muscular atrophy, or SMA, with a one-time infusion.

Don’t worry, you don’t have to be a scientist to understand it. Let me show you how it works.

Children with SMA are born with a missing or nonworking SMN1 gene. ZOLGENSMA is an infusion that delivers SMN genes where they’re needed, in a child’s body, to help keep the muscles working as they should.

Now that you know the basics, let’s dive in a little deeper to see how ZOLGENSMA works in the body and how it helps children with SMA.

A dedicated team of scientists at Novartis Gene Therapies approached SMA treatment in a bold way—by targeting the genetic root cause of SMA with a one-time infusion.

Why is targeting the genetic root cause so important? Well, the SMN1 gene provides instructions for motor neuron cells to make SMN protein.

These motor neuron cells are responsible for all types of muscle movement that we rely on daily for eating, breathing, sitting up, walking, or, when you hear a great song, singing.

If there isn’t enough SMN protein being made, motor neurons stop working. Then, these basic functions we rely on become harder to do and can be lost permanently. As you can imagine, the sooner treatment is received, the sooner the progression of SMA can be stopped.

This is where the amazing science behind ZOLGENSMA comes in. ZOLGENSMA is designed to stop the progression of SMA.

The main components of ZOLGENSMA are a gene and a vector.

The gene is a new, fully functioning SMN gene that's just waiting to get to work.

The vector is made from a type of virus called AAV9, which is not known to make people sick.

The viral DNA is removed and replaced with the new SMN gene, which is then delivered to the right places.

Think of the vector as a delivery truck—with its cargo, in this case the new SMN gene, it’s ready to make its delivery to the motor neuron cells. This process happens throughout the body with many new SMN genes getting delivered to their destination.

That’s pretty cool, right? Even cooler is the fact that more than two-thousand children have received ZOLGENSMA.

Thanks for watching. And if you have any questions about ZOLGENSMA, make sure you talk to your doctor.

How SMA is inherited

SMA is an autosomal recessive disorder. This means that in order to have SMA, a person must have 2 copies of a nonworking SMN1 gene or be missing both copies of the SMN1 gene.

Can someone treated with ZOLGENSMA pass SMA to their children?

Treatment with ZOLGENSMA allows people with SMA to make SMN protein. However, they still have 2 nonworking or missing copies of the SMN1 gene. This means that a person who’s been treated with ZOLGENSMA will pass on a nonworking or missing SMN1 gene to any children he or she may have. If this person’s partner is also a carrier, then there is a chance their children will have SMA.

What is a carrier?

A carrier is a person who has 1 healthy copy and 1 nonworking copy of the SMN1 gene that were passed down from the parents. A carrier generally does not show any signs or symptoms of SMA.

How can someone find out if they are a carrier?

To find out if someone is a carrier of SMA, a genetic test is needed. This is performed through a blood test. People with a family history of SMA, which includes a family member with SMA or family member known to be a carrier, should consider getting tested. If you are interested in learning more about what being a carrier means, speak to a genetic counselor or your doctor.

I think that knowledge is power. It’s essential to our children to know as much as we can so we can be prepared to start treatment as soon as possible after birth.

Victoria, mother of Jaxon and Olivia
Jaxon and Olivia, diagnosed with SMA in utero and treated with ZOLGENSMA right before turning 2 years old and at 8 days old, respectively. 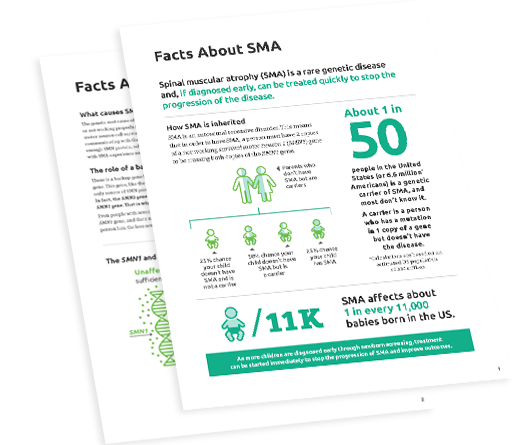 Does my child have SMA?

The Facts About SMA provides you with easy-to-understand information about what causes SMA, signs and symptoms of SMA, and how quickly SMA can progress to a life-threatening condition. Learn more about SMA and bring this PDF to your doctor’s office to determine next steps.