Morgan and Daryn couldn’t have hoped for a happier or more beautiful little boy than the one who came into their lives in January 2019. Little did they know, the bundle of joy they named Slade was starting a journey that was going to change his and his family’s life.

About 2 weeks after Slade was born, Morgan and Daryn noticed that he was a bit floppy when holding him. Their pediatrician chalked it up to him being a calm baby and told them he’d eventually grow out of it. After a second opinion from a pediatric neurologist and 3 months of physical therapy, they were still feeling uncertain about why Slade wasn’t getting any stronger. Dissatisfied with the lack of answers, they decided to bring him to Texas Children’s Hospital for genetic screening, which eventually led to a diagnosis of spinal muscular atrophy (SMA) Type 1 when Slade was 5 months old. Even though they were scheduled for an appointment with a neuromuscular specialist a week later, Morgan and Daryn were already conducting their own research. They were determined to understand what having SMA would mean for Slade.

Through their research, Morgan and Daryn learned about 2 FDA-approved treatments for SMA. One of those treatments, ZOLGENSMA® (onasemnogene abeparvovec-xioi), had just been FDA approved 2 weeks before Slade’s diagnosis. While they waited for Slade’s infusion of ZOLGENSMA, Morgan and Daryn opted to start Slade on the other FDA-approved treatment. They felt strongly that ZOLGENSMA could help Slade and, when he was almost 7 months old, he received ZOLGENSMA. Slade also continues with the other treatment today.

Fast-forward to 6 months after his treatment with ZOLGENSMA, and Slade is now 13 months old. While he has experienced challenges as a result of his SMA, his parents are encouraged by the progress he’s made since receiving treatment. “We like to focus on Slade’s inchstones, not milestones, because every little improvement is a huge win for him and is more than we ever expected,” shares Morgan.

While simple things such as a shared look, sitting together at the dinner table, or playtime with a sibling may be taken for granted in most families, they are all precious to Slade’s parents. Since his treatment started, these inchstones have appeared throughout Slade’s daily routine. “Now, he can hold his head up and support his upper body as long as he cares to stay sitting,” says Morgan. “He’ll roll off the mat we lay him on in our living room, and we can’t leave him on the bed because he will try to scoot right off.” 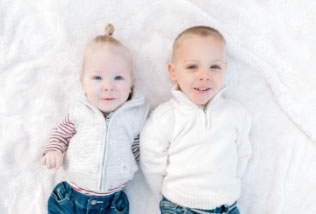 For his parents, Slade’s progress has been wonderful to watch, and with the addition of specialized medical equipment and regular therapies, his improvements are even more visible. “He seems to understand that the treatments, therapies, and equipment are all for his benefit, and he’s very tolerant of the process,” says Morgan. “He loves his medical stander and can be upright for about 30 minutes. Usually, his brother will push him up and down the hallway, which Slade loves.”

Morgan and Daryn are big believers in the importance of ongoing therapy to help manage Slade’s SMA. Speech, occupational, and physical therapy are all an integral part of Slade’s weekly care. They realize that hard work may produce only small improvements, but it’s worth it to see Slade gain strength and confidence. 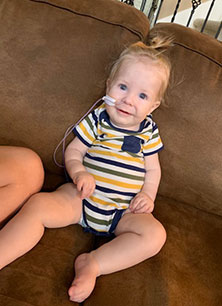 While Slade has made progress physically, his parents point out that his incredible spirit also shines. “He finds joy in everything. Just the other day he was splashing around in his bath and making the most of it,” shares Morgan. Slade has also been quick to share that joy with his family by finding his voice. “Despite being speech delayed, Slade is talking more and more. He’s really starting to bloom in that area,” says Morgan.

As he grows, Slade may continue to face challenges. But with an emphasis on his progress through inchstones, his family can see his improvements more frequently. “My favorite inchstone to date is being able to sit down to dinner with Slade,” Morgan recalls. “For the longest time he had to lay flat, but now he’s strong enough to sit up at the table and be a part of what we’re doing. He’s very vocal about not being left out.”

One year out from the day Slade was diagnosed, Daryn and Morgan reflected on his SMA and shared a little about what helps them feel grateful, saying, “One thing we’ve learned is not to take a single thing for granted. Not the day, not the ability to walk, to talk, to swallow, to breathe, to scowl, and to fight with your siblings,” shares Morgan. They hope Slade will keep reaching new inchstones, and they are excited to celebrate each one together as a family.

Hear an SMA caregiver share the moment her daughter said, “Momma” and why that one incredible word meant so much to her.

Learn how newborn screening and having SMA treatments can help improve the lives of children with SMA.